Over on BoardGameGeek, there's a cool new variant from Toomai Glittershine for use in the Reward deck.

Solar Eclipses have always acted as a distraction, causing temporary chaos. When played, they cause a phase to be skipped. They are played in the phase preceding the skipped one; for example a Solar Eclipse that skips Destiny is played at the end of the Regroup phase.

Lunar Eclipses usually cause weird stuff to happen. When played, they cause a phase to be repeated, after which the game resumes where it left off. They are played at the end of the phase to be repeated or any time after that; for example a Lunar Eclipse that repeats Launch can be played at the end of Launch or during Alliance, Planning, Reveal, or Resolution.

Here's a mockup of a card, created by Bill Martinson: 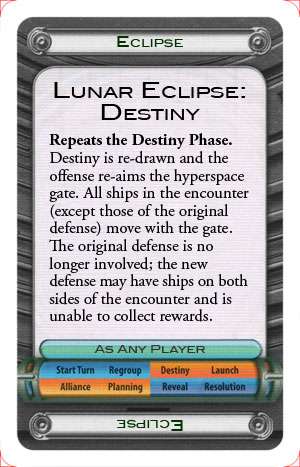 The cards would allow a player to affect a certain phase of the encounter in some way that hopefully gives him or her an advantage. There are a lot of interesting possibilities, and it's a good fit for the Reward deck.

Below are some examples of the cards:

Solar Eclipse (Regroup): Skips the Regroup Phase. The offense does not retrieve a ship from the warp. This effect may not be played if the offense has no available ships.

Lunar Eclipse (Launch): Repeats the Launch Phase. The offense may re-aim the hyperspace gate and launch an additional 1-4 ships.

Lunar Eclipse (Alliance): Repeats the Alliance Phase. All allied ships are returned to colonies before allies are re-invited.