It's taken some time before some user reviews of CI finally surfaced.

Gerald Katz posted one on the rec.boardgames.ce newsgroup- mostly positive:

"Hooray for the return of Kickers, Negative Attack Cards, and some
Edicts (Artifacts) like Space Junk and Hand Zap.

I like the crooked Negotiates. +1 compensation or -1/+1 ship to the
warp on failed deal..."

Nate Owens posted an even glowier review on boardgamegeek:

"It’s a welcome expansion, and the extra variety is so good, I would recommend this expansion be bought when you pick up the base game."

Of course, I'm pretty biased when it comes to Cosmic Incursion, but I think it's a fantastic addition to CE, and I highly recommend it. The 6th player color let's you have a bigger and more intense game- or you can just use the ships to play with Symbiote in a 5 player game.

The 20 aliens are a great mix of old a new. Sniveler was one of the most requested classic alien, and it's joined by several others I've always been fond of (Chronos, Seeker, and Plant).

Finally, I've been a long advocate of the Reward Deck (naturally). I like the fact that it makes defensive alliances an even more serious consideration for all players. While not everything in the Reward Deck is great, the lure is often too hard to resist. The first game I played with CI, I drew four rewards (all of the negative cards and a negotiate). It was a serious bust. But since I was playing Ghoul, I was tapping into the Reward Deck a lot, so the next time I ended up drawing a pair of artifacts, a kicker, and a high attack card. It's worth the gamble.

If you love Cosmic Encounter, then this expansion is a must. Even if you only like CE, I think the expansion adds quite a bit and will enrich your experience. We're less than a year away from the next expansion, which I'm eagerly awaiting... if it's in the same league as CI, it will be another great addition.
Posted by The Warp at 8:30 AM 4 comments: 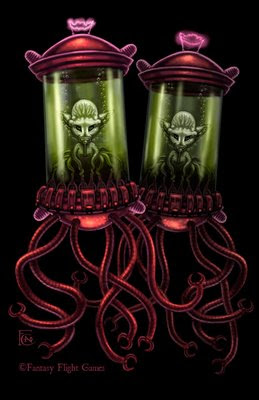 The FFG version of Clone clearly indicates that his or her encounter card is not really subject to compensation. The power text explains, "...after the encounter is resolved (and after any compensation is claimed), you may use this power to return your encounter card to your hand instead of discarding it." Thus, the encounter card is still lying face up on the table and not part of the hand. In past versions of CE, this was certainly an area that was open to debate, and I know my group discussed whether or not Filch could take Clone's card, or if anyone could get that card by negotiating for compensation. This version definitely makes Clone more powerful. 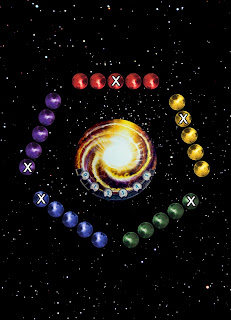 This is an expansion that directs the objectives for each player at the start of the game.

When certain stars and planets are lined up, they form shapes in the sky. In the game, players try to capture specific planets in different systems.

A set of Constellation cards, kept separate from the regular deck.

Each player draws a Constellation card at the start of the game. Cards may be played face-up, or secretly.

This has a subtle (and sometimes not-so-subtle) effect on game play. Obviously, when one player is attacking a colony they need, other players may not be so anxious to ally on the offensive side if it is not a colony they also need. Uninvolved players will ally with the Defensive Main Player more often than in regular games (if there is such thing as a "regular" game).

Players will also have to defend certain home colonies more fervently, or actually make attacks against their home system in order to regain a colony (something that rarely occurs in games with our group).

The cards themselves will have many duplicate bases (depending on the number of players), so that joint attacks are still potentially beneficial for more than one party. The set of cards can continue to grow, depending on whether or not players wish to include moons in their win objectives, as well as other expansions.

In order to account for many different scenarios, I have constructed different Constellation "decks" for different numbers of players in a game. The actual formations of the Constellation are, of course irrelevant, but feel free to connect the planets and decide what shape they make.